U-Space - a way to integrate RPAS into the civil aviation concept, contribution from Switzerland

Applications of Unmanned Aircraft Systems (UAS) are growing rapidly. They are used for a wide range of tasks, including logistics, surveillance, geo information or agriculture, and their economic significance is assessed to grow rapidly in the future. Worldwide, Civil Aviation Authorities (CAAs) are working on regulatory frameworks for UAS. In many major aviation regions there is a clear sign of convergence towards a risk-based and operation-centric approach, based on recommendations from the Joint Authorities for Rulemaking on Unmanned Systems (JARUS). This approach allows CAAs and industry to address safety for a wide range of different UAS operations. However, it is also becoming increasingly clear that a risk-based approval process is perhaps a necessary, but not adequate condition for the scalable use of UAS technology. UAS Traffic Management (UTM), which in Europe is commonly referred to as U-Space, is increasingly seen as an additional prerequisite to enable large-scale sustainable use of UAS.

U-Space is commonly defined as a set of services intended to enable sustainable, efficient, safe and secure access of a large number of UAS to airspace. It is not limited to a particular airspace, but is relevant for all types of UAS, all airspaces and all types of missions, including interaction with manned aviation. U-Space services will be provided in a connected manner, based on open protocols that enable maximized synergies with regard to the use of data between services, and with a high degree of automation, thus minimizing the need for human intervention. Initial applications of U-Space are being used and further developed in various major aviation regions worldwide, based on the integration of existing technologies.

This article first looks at the regulatory approach commonly used for UAS and establishes the main rationale as to why U-Space is needed in the context of this approach. It then describes necessary actions from the point of view of CAAs and governments more generally in order to move forward, using experiences gained in Switzerland on the establishment of initial U-Space services as examples. In general, the article focuses on safety, but also addresses regulatory approaches for the protection of other public interests such as security, privacy or environmental protection, when appropriate. It does not go into technical details, but tries to stay at a conceptual level, while referring to existing and emerging publications for details.

The reason for the appropriateness of a risk-based approach for UAS operations safety regulation is straightforward: with the exception of UAS carrying people on board (“air taxis”), the risks emanating from a UAS is differently structured compared to that of manned aviation. In the case of the latter, regulation is focused on protecting people on board an aircraft, which indirectly protects people in other aircraft, as well as people and property on the ground. For example, this leads to a rather rigorous approach for aircraft type certification, because regardless of the intended operation, the risk of people on board needs to be mitigated to an acceptable level.

In the case of UAS, the mitigations required to ensure an acceptable level of safety depend on the intended operation. If an operation bears higher risk for people in other aircraft or on the ground, more rigorous mitigations are justified; if the risk is lower, less stringent mitigations are acceptable. This means, for example, that for a UAS being used over a rural area or in an airspace not frequently used by other traffic, the applicable risk mitigations will be considerably less stringent compared to when a similar UAS is used over a crowd of people or in busy airspace. For the purpose of structuring applicants’ assessment of risk and identifying the level and combination of appropriate mitigation measures, risk assessment processes such as JARUS Specific Operations Risk Assessment (SORA) have been developed and successfully applied by the industry and CAAs. The relevant documentation can be found on the JARUS website: www.jarus-rpas.org.

SORA-based UAS approvals have enabled a wide range of operations to be conducted at an acceptable level of safety. However, it has become increasingly clear that for complex operations (e.g. Beyond Visual Line of Sight in complex airspace) there is a need for dedicated tools to support the SORA risk assessment methodology. This is particularly the case for cities, where UAS operations take place in airspace used by other aircraft, usually due to the proximity to airports or air ambulance flights to hospitals, as well as areas with a dynamic ground risk, like short-term assemblies of people due to events. At the same time, cities are where the use of UAS is economically most interesting. In the absence of U-Space, such operations require inefficient risk mitigations strategies, often involving high human workload for operators, such as calling ATC manually, informing operators that are likely to use the same airspace, or ad hoc contact with local police. U-Space services, such as automatic flight approval, dynamic airspace management or deconfliction services would dramatically increase efficiency of such risk mitigation measures.

Most relevant technologies for a first set of U-Space services already exist today. In China, six individual UTM Services providers offer basic U-Space services in various parts of the country. In the USA, the FAA and private UAS Service Suppliers (USS) are using LAANC (Low Altitude Authorization and Notification Capability) to automatically approve UAS operations in the vicinity of aerodromes. In Switzerland, the Swiss ANSP (Skyguide), together with other stakeholders, has demonstrated the use of a wide range of initial U-Space services during a technology demonstration in June 2018 at the first World Economic Forum Drone Innovators Network meeting, which is currency being upgraded to a nation-wide pilot project. Please take a look at www.skyguide.ch/de/events-medien/u-space.

Figures 1 and 2 show examples for such initial U-Space services including dynamic geo awareness and real time traffic information (figure 1) and real-time ground risk data based on cellular network usage (figure 2) in use in Switzerland today.

Figure 1: UAS ground control station software with directly integrated dynamic geo awareness information as well as the location of other traffic as used at a technology demonstration in Geneva in September 2017 (source: Skyguide, PX4, https://www.skyguide.ch/de/events-medien/u-space-live-demonstration/ last accessed on 18 May 2018 ). In this example, a rescue helicopter is using the same airspace as the UAS. The U-Space provides the relevant information (land immediately) directly to the UAS operator, within the ground control station software, thus not requiring her or him to consult another screen or application. 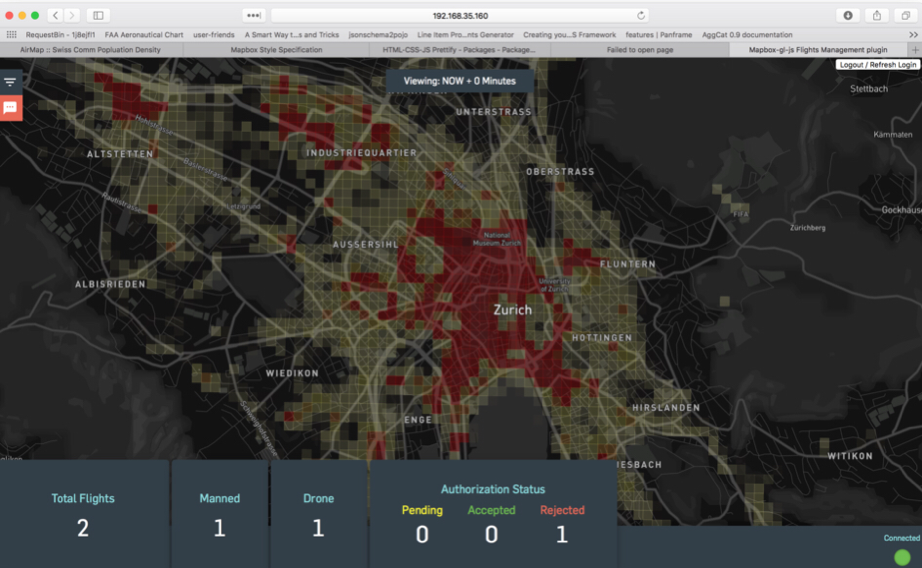 Figure 2: The map shows integrated dynamic ground risk data into a city map based on cellular network usage (red squares indicate more people, source: Skyguide/Swisscom/Airmap). This integration of data illustrates the capability of U-Space to bring together information from many sources in order to increase aviation safety and scale up drone operations in a sustainable manner. However, such high level of integration requires early standard setting and the use of open data exchange protocols.

The challenge for enabling U-Space at a larger scale lies in the integration of existing technologies, which requires legal certainty to attract investments as well as a robust regulatory framework to ensure the protection of public interests and to inform the necessary standardisation activities. The focus on regulation and standardisation is particularly important because the research and development (R&D) activities linked to U-Space are being conducted in a much more decentralized manner than R&D in manned aviation. Therefore, unlike manned aviation, trying to steer technology development centrally will most probably not be an effective strategy to enable initial U-Space services. Instead, regulation and standardisation should be prioritized.

The focus of this article was to illustrate the need for U-Space to regulate and manage UAS operations by risk based and operation centric approvals. However, U-Space can be used for many other purposes as well. Considering that current technology allows a large majority of UAS to be connected to a network, remote identification of UAs while in fight could be enabled at marginal additional cost and without the need to equip drones with additional hardware. Furthermore, U-Space can help to automate approval processes for UAS operations, which is another prerequisite for scalability, as authorities will most likely not be able to cope with the increasing demand from operators. The FAA is already doing this in the LAANC program.

Assuming that most scalable UAS operations will require some level of U-Space services, be it to address safety, security or privacy concerns, the challenge for regulators lies in the drafting of regulation that not only ensures the protection of these public interests, but also maximizes the amount of synergies that U-Space can bring as an enabler for innovation more generally. Despite these regulatory hurdles to be overcome, there will be most probably also be political and economic challenges linked to the introduction of U-Space. In particular, scaling the use of UAS technology will require manned aviation to adapt, in particular regarding the need to equip manned aircraft with technology enabling them to become part of the U-Space. However, this challenge can be reduced considerably if the respective technology will be available at low cost.

For an overview of main technology providers, please refer to the Global UTM Association (GUTMA).
https://gutma.org/

For the use of the cellular network for UAS operations, see for example the “3GPP TR 36.777, Enhanced LTE support for aerial vehicles” report
ftp://www.3gpp.org/specs/archive/36_series/36.777