Swiss researchers have developed a unique technology that uses concentrated solar heat to produce sustainable aviation fuel. The solar fuel technology is now being commercialized and will hopefully soon make a significant contribution to decarbonizing aviation.

The aviation industry is currently responsible for about two to three percent of all human-induced fossil carbon dioxide (CO2) emissions. To combat climate change, aviation must contribute to reducing these emissions. An appropriate way to do so is a shift towards climate-neutral aviation. Despite the COVID-19 pandemic massive growth is forecasted for the aviation sector over the following decades. Yet, at the same time, it is one of the most challenging sectors to decarbonize because of its need for high-density energy carriers. It is undisputed that kerosene will continue to be needed to operate the vast majority of aircraft in the coming decades. The key to decarbonizing aviation therefore lies in replacing fossil kerosene with drop-in fuels produced from renewable sources i.e. biogenic or synthetic substitutes for petroleum-derived liquid hydrocarbon fuels such as fossil kerosene. Various renewable fuel technologies are currently being developed. The industry uses the umbrella term “Sustainable Aviation Fuels (SAF)” to group them.

In Switzerland, researchers have turned to the most powerful and abundant renewable energy source on Earth to produce SAF: the sun. The sun delivers more energy to Earth within a couple of hours than the whole world consumes within a year. Swiss researchers have developed a unique technology that allows them to tap into this huge potential for the production of SAF. The Sun-to-Liquid (StL) technology uses high-temperature solar heat to convert CO2 into sustainable kerosene.

The technology uses concentrated solar mirror systems to generate high-temperature process heat up to 1’500°C. A mirror field tracks the sun and reflects the solar radiation onto the top of the solar tower, where a receiver absorbs the radiation and turns it into process heat. The generated heat is fed to a thermochemical reactor that turns CO2 and H2O into syngas, a mixture of H2 and CO. The syngas is then processed by standard gas-to-liquids technology into fuels, such as kerosene, gasoline, or diesel. Solar fuel production runs 24/7 thanks to integrated thermal energy storage. 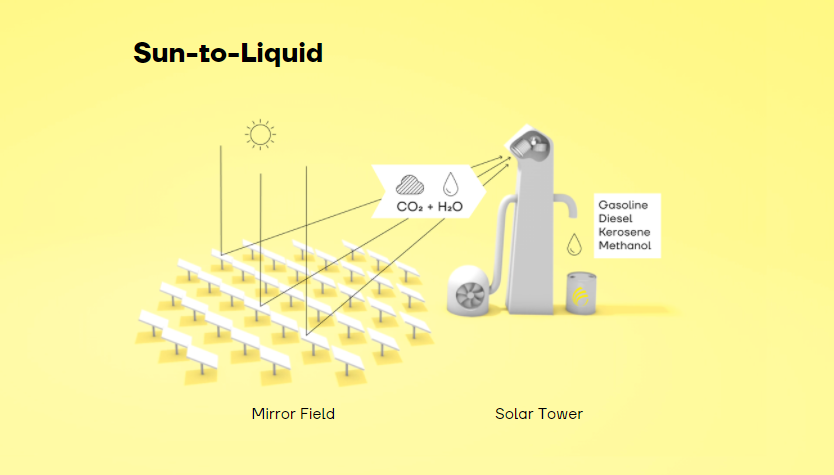 The mirror field reflects the sunlight onto the top of the solar tower and delivers the process heat to turn CO2 and H2O into fuel. Picture: Synhelion

After producing the world’s first solar fuel in the lab in 2014, the Swiss Federal Institute of Technology (ETH Zurich) demonstrated the production of solar fuel under real field conditions in June 2019. The solar mini-refinery on the roof of ETH Zürich turns ambient air and sunlight into fuel. It captures CO2 and water vapour from ambient air and turns it into fuel using concentrated solar heat. This ground-breaking scientific success was also published in Nature 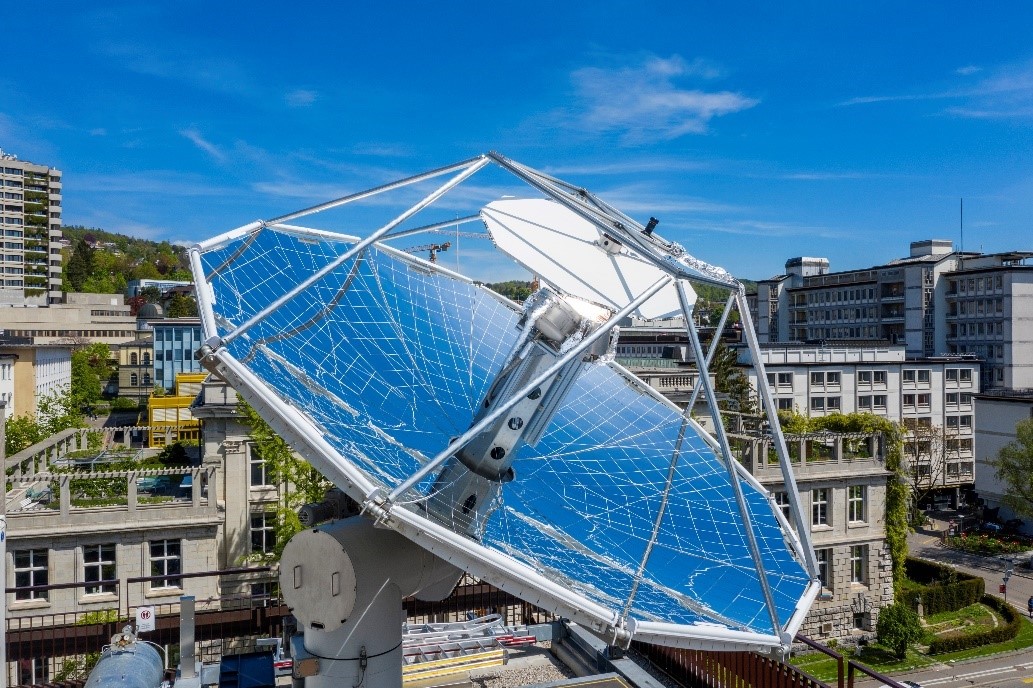 The solar mini-refinery on the roof of ETH Zurich yields 0.1 litre of solar fuel per day. Picture: ETH Zurich

From research to commercialization

In the past few years, the company has scaled and tested the individual components of the technology and is now ready to build the world’s first industrial-scale solar fuel plant in 2022. The plant will be located at the Brainergy Park in Jülich, Germany. Fuel production is scheduled to start in 2023.

By 2030, with its Sun-to-Liquid technology Synhelion is targeting an annual fuel production capacity that could cover about half of Switzerland’s jet fuel demand In the following decades, a speedy ramp-up of fuel production is possible to significantly contribute toward the net-zero target by 2050. A study assessing the geographical potential concluded that solar fuels could cover 50 times the current global jet fuel demand. Key advantages over other SAF technologies are that solar fuel plants are typically installed on arid lands and do not compete with agriculture. Furthermore, they are independent from an electricity grid as they produce the necessary solar energy on-site, and thanks to thermal energy storage, fuel production can run 24/7, which is key for economic efficiency. To ensure the speedy ramp-up of SAF production, Switzerland  – together with many other states – is considering to introduce a mandatory, continuously increasing percentage of synthetic fuels (quota) to be mixed with conventional jet fuel.
It is clear that very high investments will be necessary to switch the energy source of aviation from fossil to renewable and that the production costs for SAF are currently significantly higher than for conventional jet fuel. The additional production costs are projected to decrease with time and with increasing total production capacity. SAF offer the huge advantage that they can decarbonize aviation in good time as they can be used without any adjustments to the existing global fuel infrastructure. Engines won’t need to be refitted and the current aircraft fleets will not need to be replaced. Finally, nor will airports have to adjust their processes. We can keep using the fuel infrastructure that has been built up around the world over decades. At the same time, the global need for mobility will be fulfilled by climate-friendly aviation. However, this will only be possible if appropriate steps will be taken by the aviation stakeholders at global, regional and national levels to reduce the cost for the production of SAF and by this to open the pathway for their widespread use.