EUROCONTROL’s Maastricht Upper Area Control Centre (MUAC) is the only multinational civil-military air navigation service provider in Europe. Its story began 50 years ago and since then MUAC has helped introduce some of the industry’s most innovative breakthroughs to cope with growing operational density, complexity and environmental challenges.

MUAC handles 1.9 million flights a year (pre-pandemic figures), with the highest controller productivity on the continent (2.23 IFR flight-hours per air traffic controller-hour), first-rate cost-efficiency and excellent safety records.
The MUAC concept is therefore a blueprint for European air traffic management, proof that civil and military cross-border cooperation is not only feasible but essentially the best guarantee for a high-performance, efficient and safe air traffic management service.

More than half a century ago, the European countries had a vision to create several international air traffic control centres to provide a common, consolidated and more efficient service for the upper airspace across Europe. The agreement to set up the first international air traffic control facility on Dutch territory was reached in 1964 and the construction of the site started in 1966. 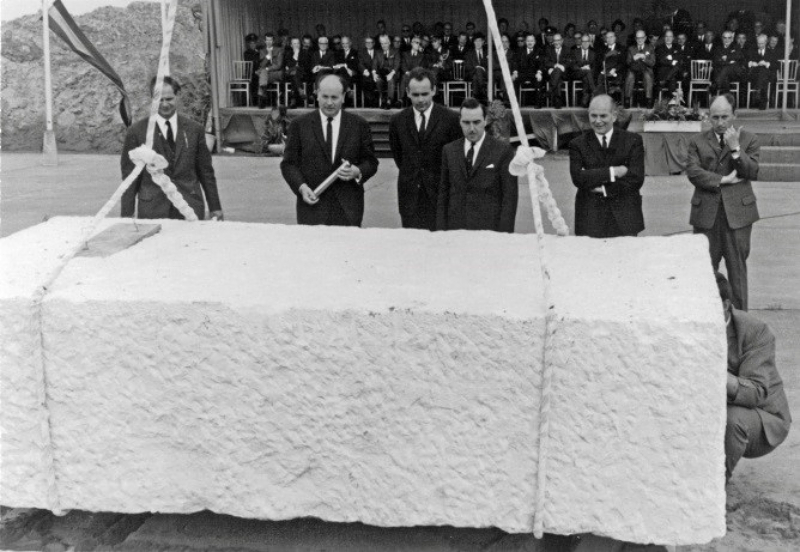 Laying the foundation stone of MUAC’s building in 1966 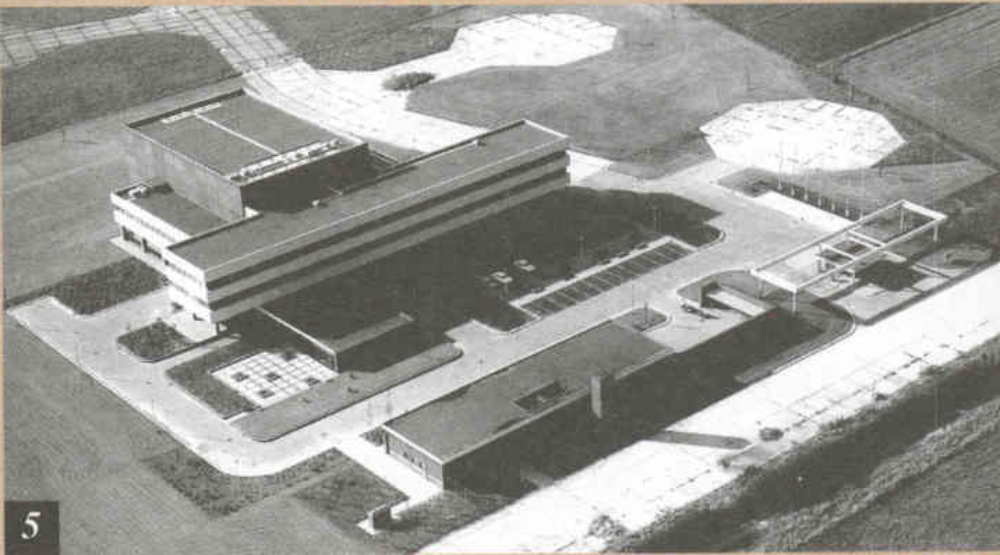 EUROCONTROL’s Maastricht Upper Area Control Centre (MUAC) was born exactly 50 years ago as the first, and today still the only, multinational ATC centre in Europe.

MUAC became operational on 29 February 1972, initially responsible for the upper airspace of Belgium and Luxembourg. In 1974, the upper airspace of north-west Germany and in 1986 that of the Netherlands were integrated into its area of responsibility. Full integration was achieved because MUAC’s sectors were not dictated by national boundaries, but by the operational requirements of international traffic flows. With this, MUAC became the first multinational cross-border air navigation service provider in Europe. 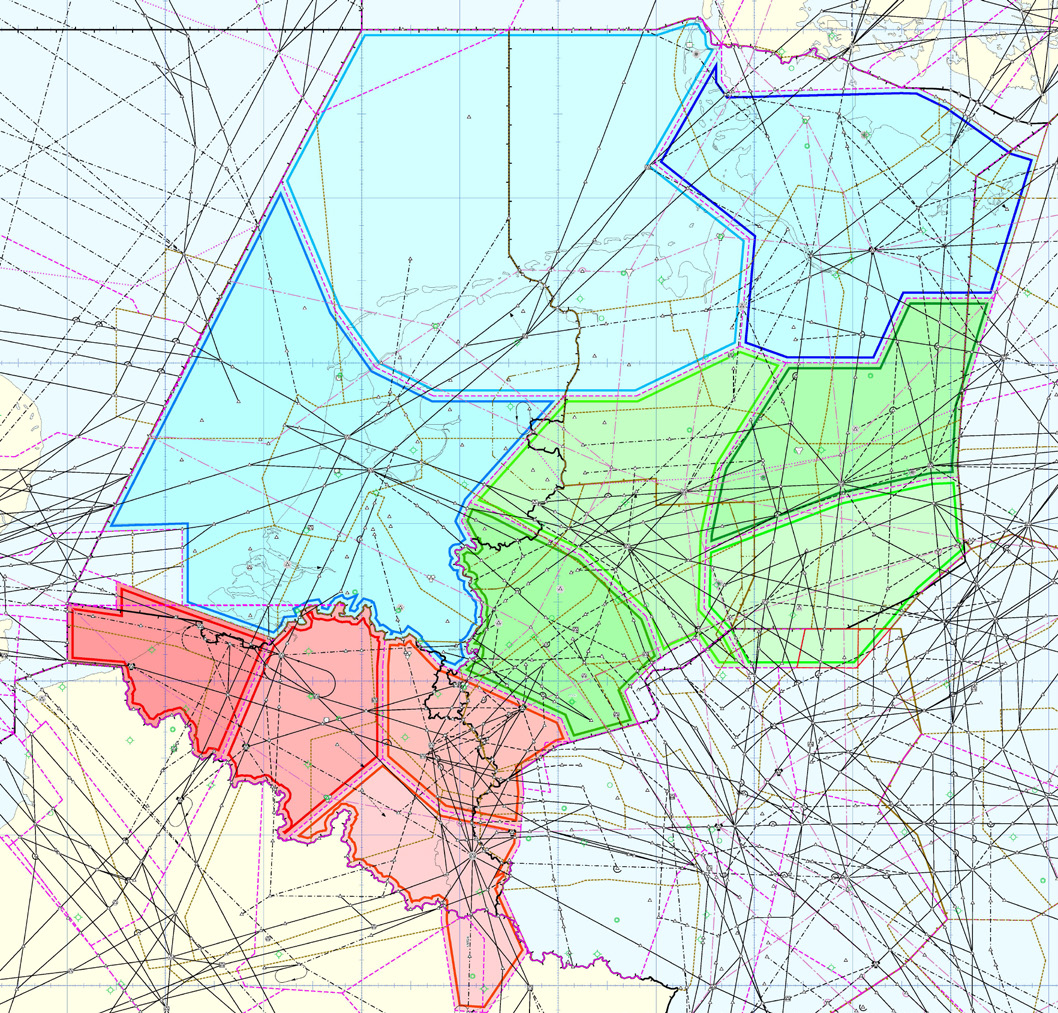 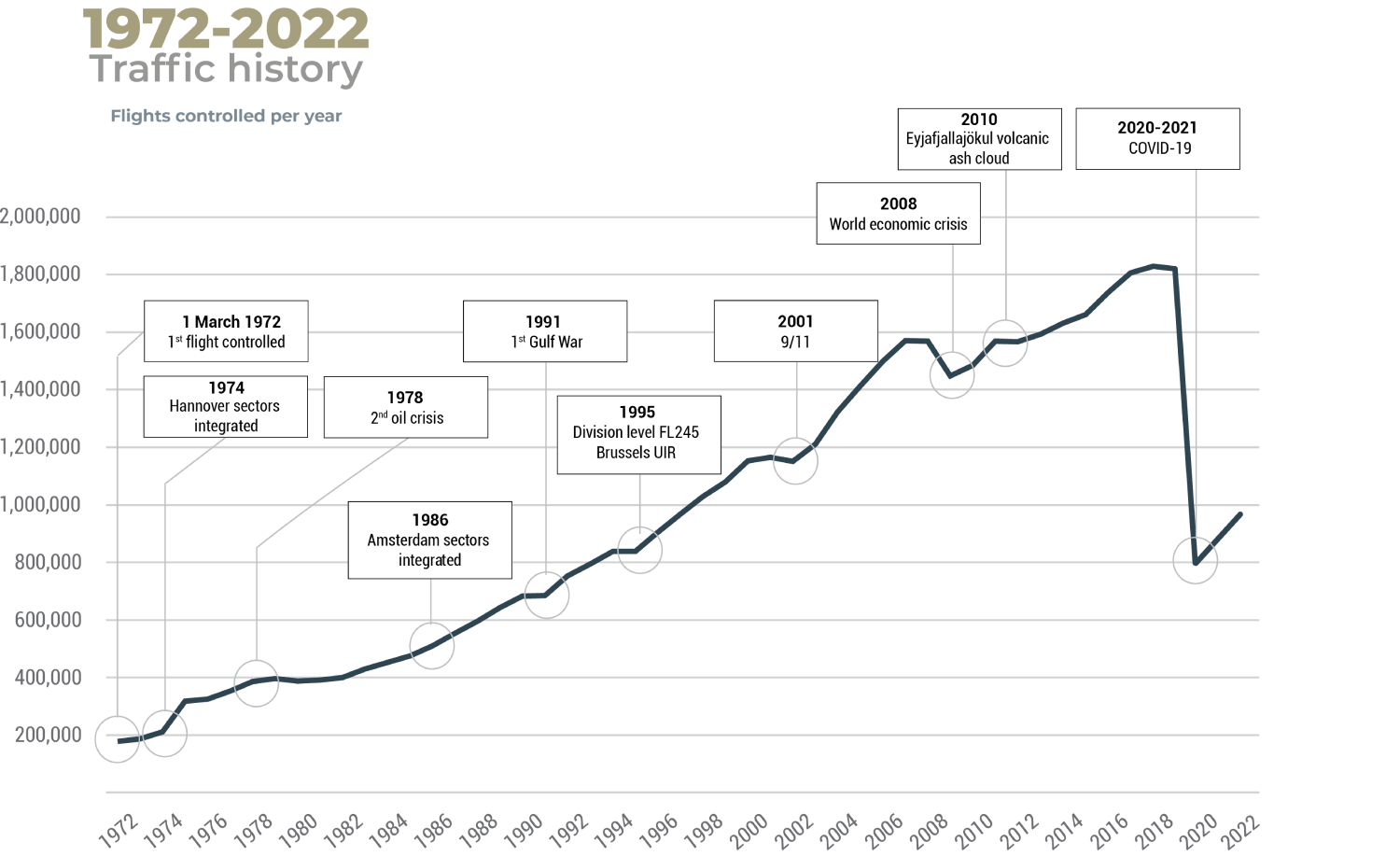 The benefits of this approach to air traffic management and service provision are clear. MUAC is a tangible example of a successful multinational project in the core area of Europe, and a working demonstration of a functional airspace block, offering considerable benefits to aircraft operators, its Member States and aviation as a whole. It was a brave and ambitious move from the Member States – Belgium, Germany, the Netherlands and Luxembourg – and their continued faith and support in MUAC have paid off.

In 1975, the German military sector with the call-sign “Lippe Radar” was co-located at MUAC, and it controlled military flights in the upper airspace over north-west Germany from Maastricht until 2017, when its staff and the task were fully integrated into the Maastricht Centre. In the same year, MUAC was also tasked with providing military air traffic control services in Dutch upper airspace, making it a unique cross-border civil-military air navigation provider (ANSP) in Europe. 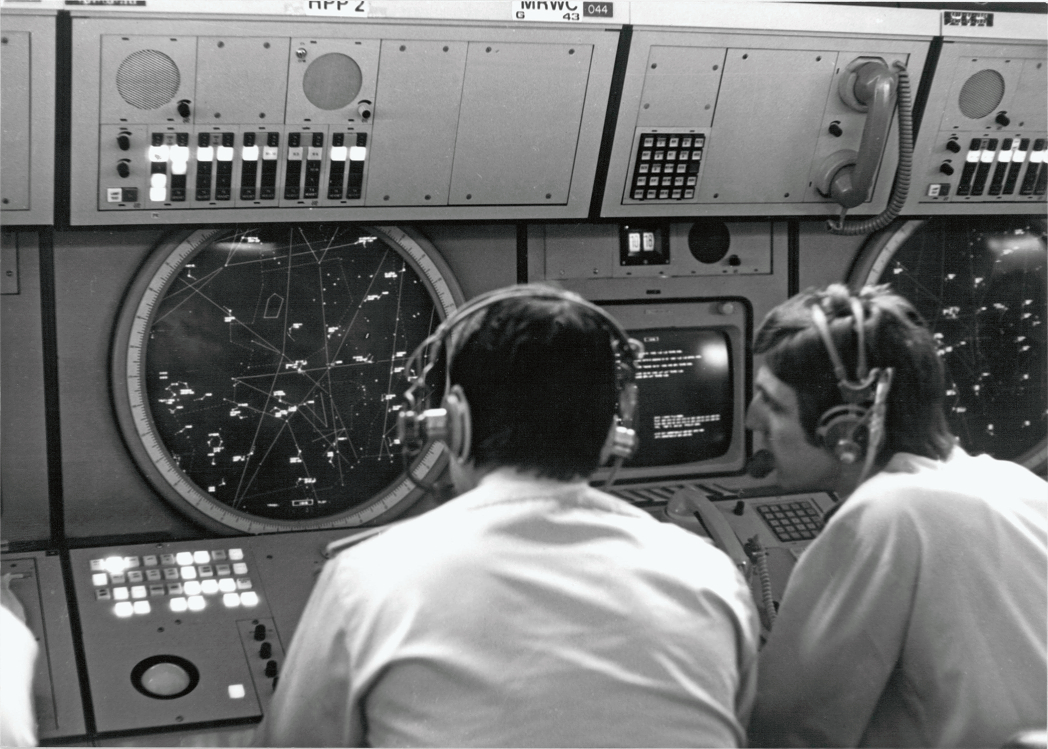 Military controllers of “Lippe Radar” at MUAC in 1976

Although less military than civil traffic is handled by MUAC, the provision of support to military flights is a complex and work-intensive task. Since 2017, MUAC has cross-trained more than 95% of its operational personnel to provide air traffic control services to both civil and military customers. This includes supervisors, air traffic controllers and flight data specialists. 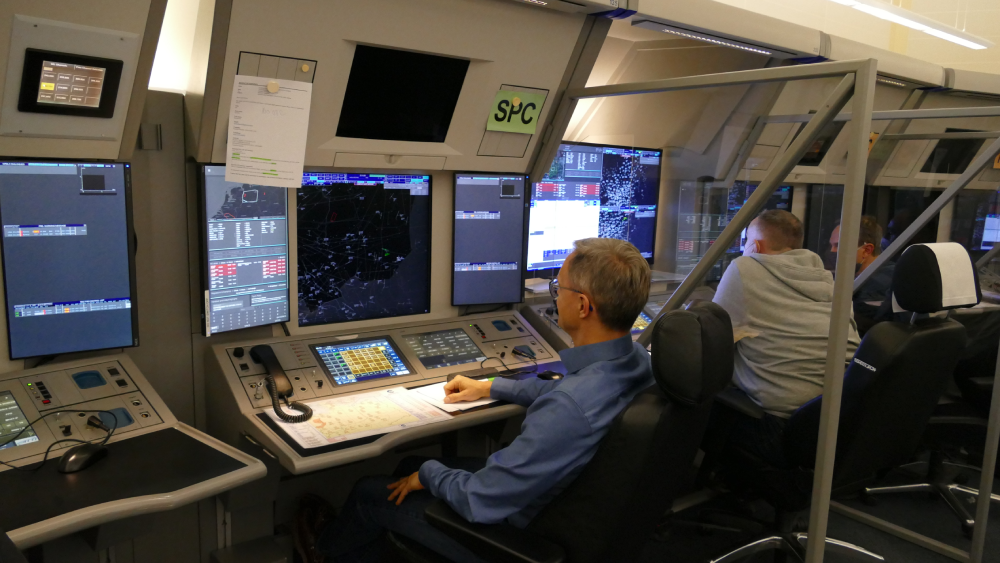 Military position at MUAC in 2022

Furthermore, the MUAC Flexible Use of Airspace (FUA) Cell has been operational in Dutch airspace since 2020, responsible for tasks such as the daily publication of activation times of military areas and their updates in the Amsterdam FIR.

Over the five decades of its history, MUAC has become widely recognised as a pioneer of new concepts, systems and technologies, commissioning at an early stage some of the most interesting technologies which have now become a standard in the industry.
One of the earliest was the short-term conflict alert (STCA) tool in 1980, developed entirely by MUAC's own engineers. It is now used worldwide, giving controllers a 128-second advance warning of possible infringements of minimum separation standards.
Electronic flight planning and coordination tools were introduced in 1992, making it possible to gradually discard flight progress strips. Thirty years later, paper strips are still in use in some parts of the industry. 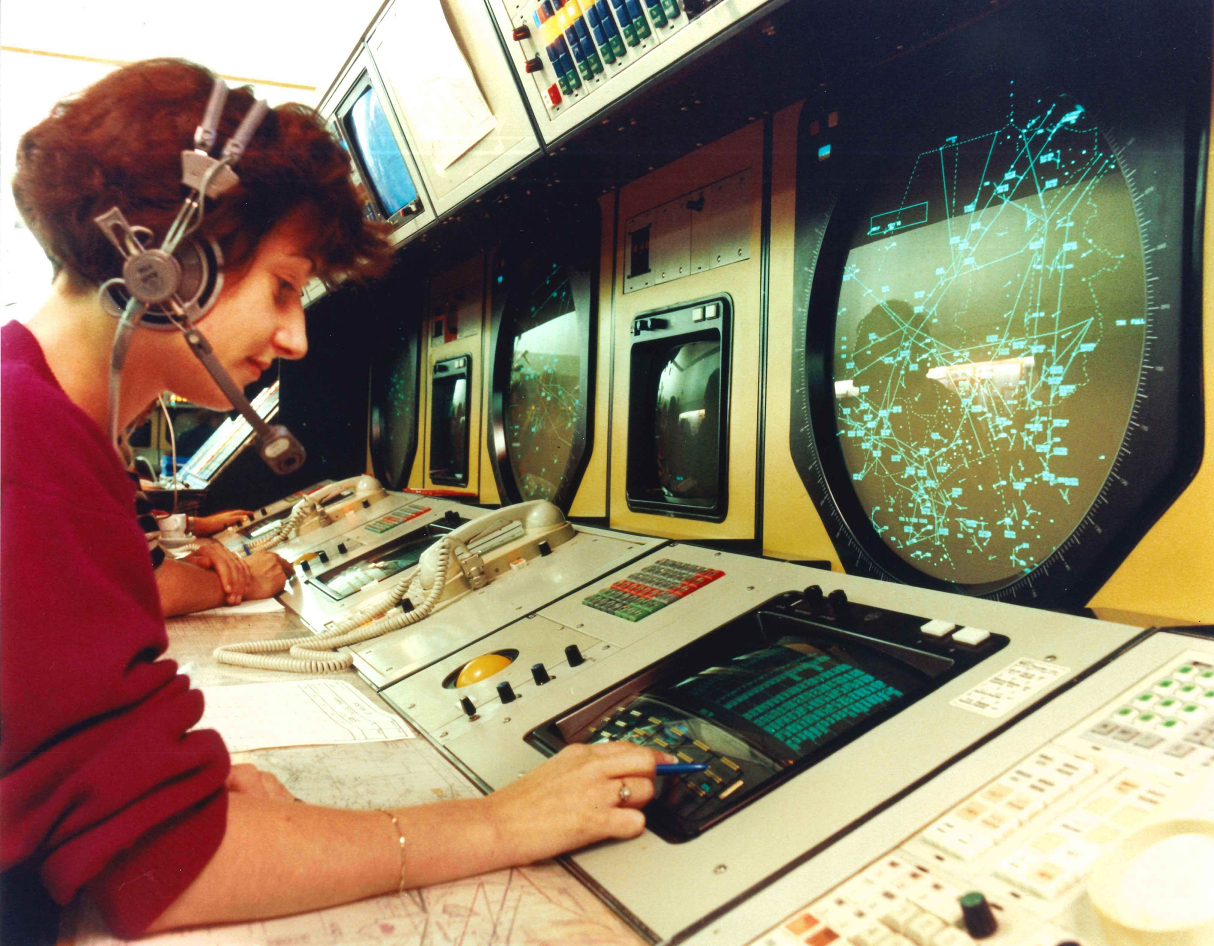 In 1996, MUAC was the first ATC facility in the world to trial controller-pilot datalink communications, and in 2001 the first to use this technology operationally via the Aeronautical Telecommunications Network (ATN) over VHF Data Link. It allowed written communication between controllers and pilots, liberating often saturated radio frequencies, freeing up ATC capacity and facilitating clearer messages. Since 2020, air navigation service providers in Europe are required to provide datalink services, and aircraft operators are mandated to equip all flights operating above FL285 to use datalink in European airspace.
Next in the line of important technological innovations was a next-generation trajectory-based flight data processing system in 2008 and the integrated flow management position (iFMP) in 2015. In addition, since 2017, MUAC has been using a new machine-learning software relying on neural networks to calculate the route an aircraft is most likely to fly, not only by looking at the filed flight plan, but also on the basis of historical flight data. MUAC is now going one step further in using artificial intelligence to address flight trajectory uncertainty. 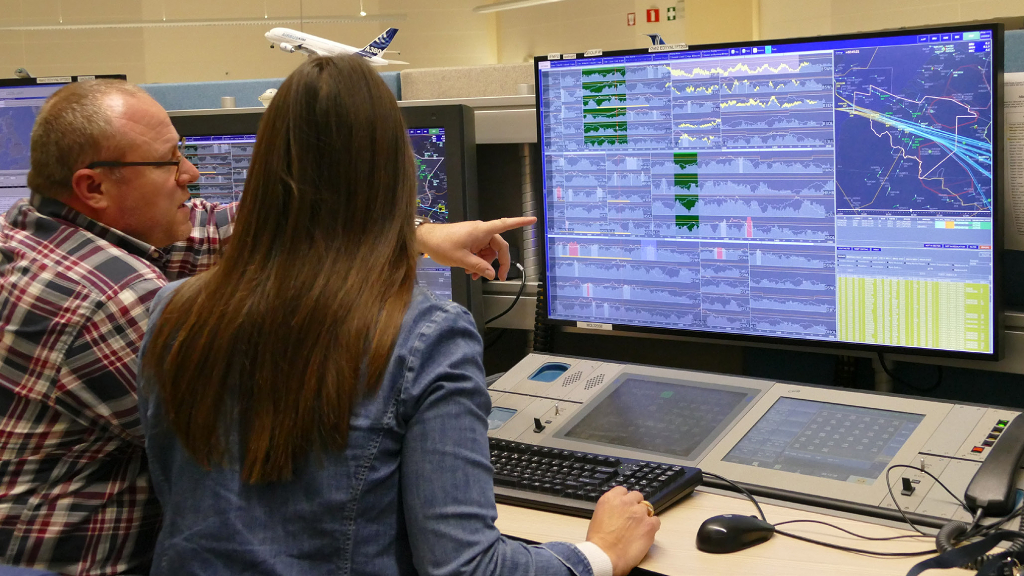 To wrap up the list of innovations for now, but without trying to be exhaustive, it is important to mention that MUAC has been validating initial four-dimensional flights (i4D) and automatic dependent surveillance – contract (ADS-C) for nearly 10 years. i4D makes sure that the (planned) trajectory is automatically synchronised between the air and the ground whilst ADS-C enables aircraft to log on to the MUAC system and automatically downlink flight management system information, which can be displayed on the controllers’ screens. Following the successful first live trials of ADS-C in 2019, MUAC is planning to make it fully operational in 2022.

MUAC certainly owes its excellence to its dedicated staff, who have always had a special drive to constantly and proactively improve a seemingly perfectly functioning system. MUAC firmly believes that having employees from diverse backgrounds (currently of 32 different nationalities) is key to its success. Its diverse workforce brings a better, faster and more innovative approach.
Whilst its staff are undoubtedly innovation-focused, MUAC's concept and technology maintains  humans as central in its system. Every change and development is carefully considered from the human factor perspective, with the aim of making it user-friendly while keeping safety and efficiency at their best. 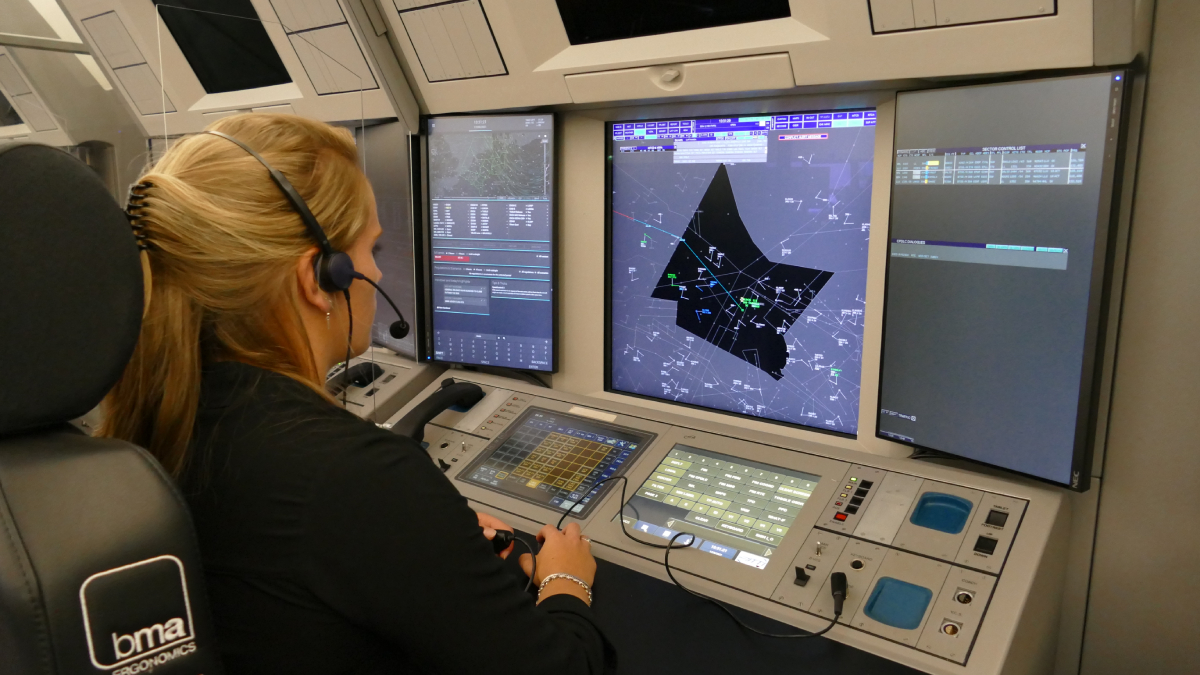 Striving for success and remaining best of class, MUAC staff have always been encouraged to come forward with their ideas for improvement. Many of the ground-breaking developments of the past five decades came from them and were taken on board. This is the secret to how MUAC has kept its employees passionate, engaged and highly performing over 50 years.

Opening horizons in the new millennium

The topic of sustainability has now risen to the top of the political and societal agenda, and MUAC’s pioneering spirit does not fail when addressing the challenge posed by aviation’s environmental impact. This is also thanks to the fact that in 2019, John Santurbano, Director MUAC, took on the role of Champion CEO of the FABEC Environment Standing Committee, triggering a number of initiatives at local level at MUAC, in FABEC (Functional Airspace Block Europe Central) and also with the European Union Aviation Safety Agency (EASA).

As long ago as 2011, MUAC gradually implemented free route airspace (FRA), and in 2019 successfully transitioned to 24/7 FRA. Since 2015, extended arrival management has also been part of the MUAC portfolio. In addition, several other airspace design projects and unique customer services have been tested and implemented in order to shorten routes, save fuel, reduce emissions and increase efficiency.

One of the most recent and first-of-its-kind initiative was a contrail prevention trial run by MUAC and the German Aerospace Centre DLR in 2021. It investigated the operational feasibility of contrail prevention by air traffic control, and evaluated its impact. This is yet another ground-breaking enterprise which MUAC staff have enthusiastically embarked upon with the hope of unleashing potential new sustainable practices for aviation. 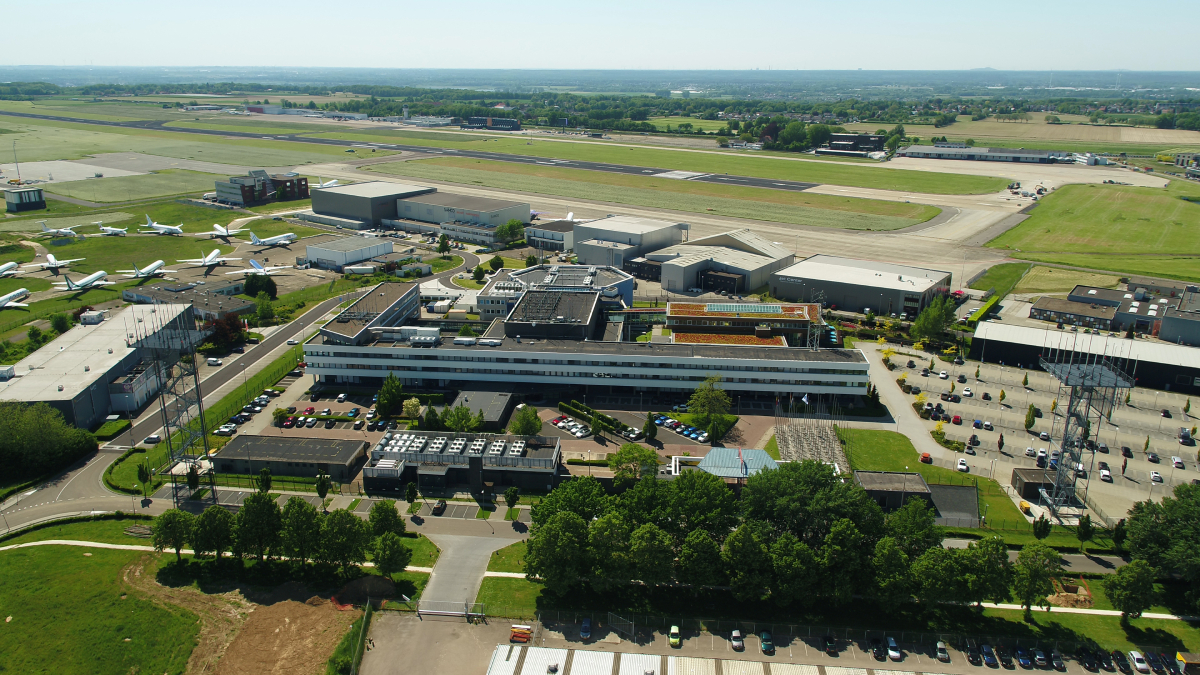 Last but not least, it is worth mentioning that in the last few years, MUAC has been developing a new vision: in addition to continuing to provide air traffic management services to its direct customers, the airlines, it also aims to become an ATM data service provider (ADSP). This means that MUAC is seeking to develop scalable collaborative solutions with other ANSPs as partners. This will further increase international cooperation, reduce the fragmentation of systems and software, and cut costs for all partners.

MUAC successfully shared its ATS systems with the Royal Netherlands Air Force until the Dutch military integration in 2017, and in 2019, the Belgian Air Force followed suit in using data provided by MUAC. These are pioneering examples of the “virtual centre” concept. Similar cooperation has been initiated with Slovenia Control, skeyes and Deutsche Flugsicherung (the DFS).

Braced for the next half century

All in all, these five decades have presented numerous opportunities, which MUAC has not hesitated to seize. There have not only been successes but also challenges for and lessons learned by those who brought MUAC to the position it is in today: an innovative and passionate cross-border civil-military air navigation service provider in the busy and complex core area of Europe. This is what 50 years of passion and innovation can bring. 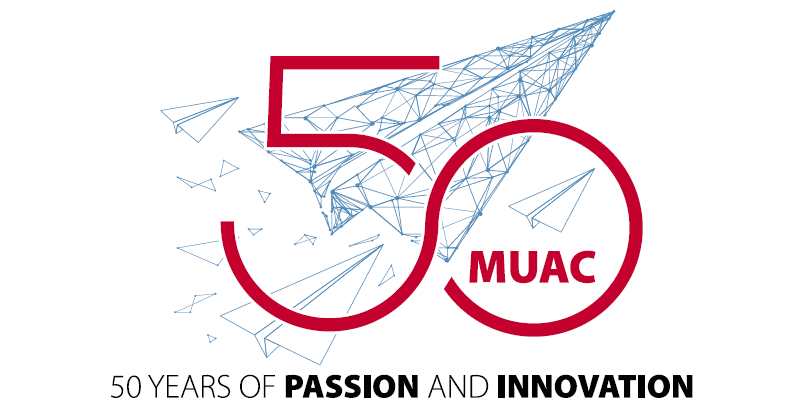 (contribution from The Netherlands)