Airspace infringements (AI) are also referred to as unauthorized penetrations of airspace. They are generally defined as flights into notified airspace without previously requesting and obtaining approval from the controlling authority of that airspace in accordance with international and national regulations.

The number of airspace infringements has increased significantly in Europe over recent years. In comparison to our neighbouring countries, Belgian statistics are particularly high, considering our relatively small airspace.

Airspace in Belgium is very complex and avoiding infringements is not always easy, even for the most experienced pilots. There are 10 controlled aerodromes (military and civilian) in Belgium. Additionally, most of these aerodromes are located close to each other, and/or close to the national borders. 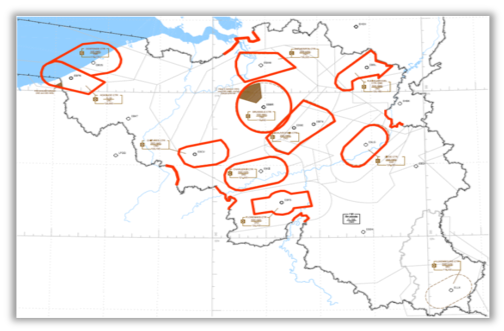 Controlled traffic regions (CTRs) typically reach from the ground up to 1,500-2,500 ft above mean sea level (AMSL). When flying higher, there is an additional risk of entering terminal control areas (TMAs). These are located on top of CTRs and are spread out in a wider area. At higher altitudes, the possibility to remain outside controlled airspace (TMAs and/or ATS routes) over Belgian territory is fairly limited.

In 2017, 150 airspace infringements were caused by General Aviation visual flight (VFR) traffic. As most of this traffic flies in class G (uncontrolled) airspace, where navigation is uncontrolled and radio communication is not mandatory, there is a higher risk of unintentional entry into notified airspace. Therefore, the Belgian CAA focuses mainly on General Aviation VFR traffic as well as on pilot training organisations, in an effort to reduce the risk of airspace infringements in the future. Awareness has to be raised on the location and constraints of the protected areas around the controlled aerodromes in Belgium. 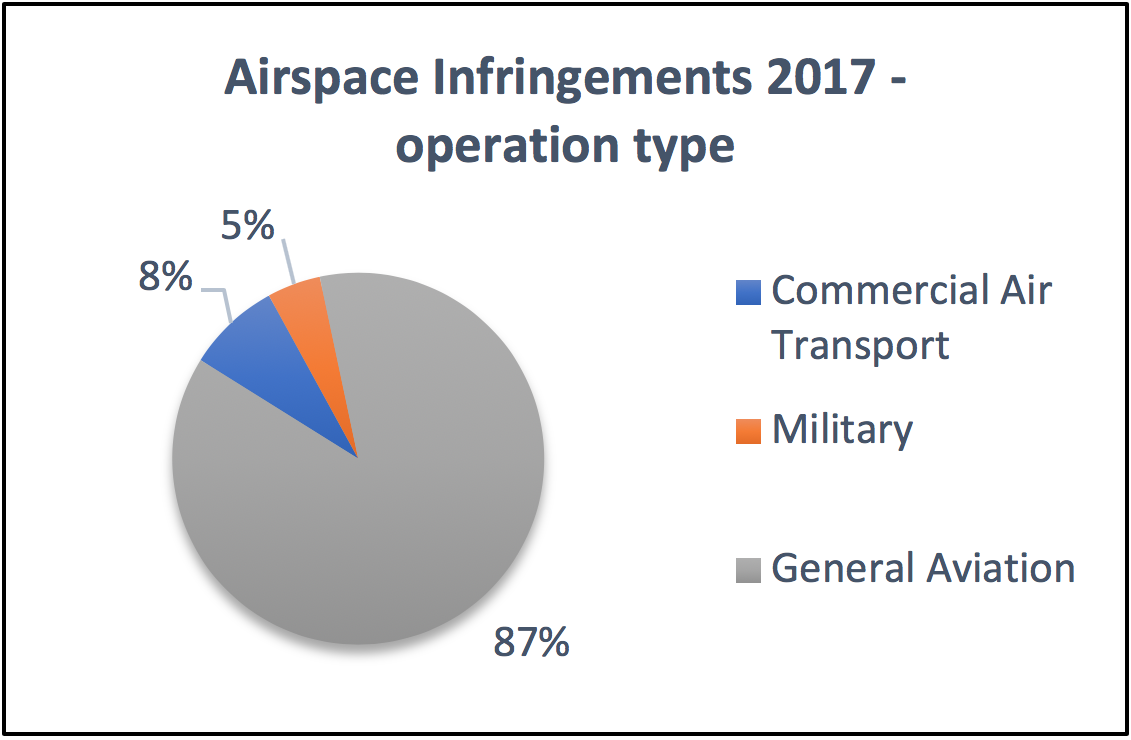 It’s hard to identify a single reason for airspace infringements in Belgium: navigation errors, poor ATC radio communication skills, reduced navigation skills, not being aware of changes in airspace and lack of flight preparation. All of these factors may cause many recreational pilots to prefer to fly through narrow VFR-corridors, in between CTRs, just to remain in uncontrolled G-class airspace. Slight distraction, loss of situational awareness, crosswind and reduced visibility, may easily lead to an infringement.

Why is it important to avoid airspace infringements?

There are many possible consequences, with increasing seriousness:

What did we do to avoid infringements in the Belgian airspace?

a.    Analysis of post-infringement questionnaires and feedback to the aviation sector

An airspace infringement is considered as an incident and can be investigated and possibly lead to prosecution of the pilot(s) involved, if gross negligence is suspected. The reporting culture however should be open and voluntary, so the flying community can learn from these incidents. The Belgian CAA, the Belgian ANS Service Provider and the Belgian Air Force, have joined forces, in order to reduce the number of infringements. The approach to this problem is one of documenting the incidents, drawing conclusions, implementing improvements and stimulating awareness and training on the matter instead of blaming and punishing.

Therefore, the BCAA has developed a post-infringement questionnaire for use by pilots on a voluntary basis in order to develop a better understanding of why airspace infringements occur. Belgium sends for each reported infringement the questionnaire to the pilot to get more insight in the causes and nature of infringements. In 2017, 75 pilot replies have been received and analyzed. The information collected from completed questionnaires is analyzed to identify whether there are common factors or trends associated with such events.

The analysis of the reported incidents and questionnaires filled out by the pilots involved, indicates that an insufficient flight preparation, distraction, the complexity of the Belgian airspace and the incorrect use of GPS or PAD applications are the main contributory factors leading to airspace infringements. To raise the awareness and to demonstrate the usefulness of good reporting, the summary of the results is made public and shared with all stakeholders. The in-depth statistical analysis of the airspace infringement is published on the BCAA’s website.

The information and its analysis assist in developing a better understanding of the causes of airspace infringements and support the identification of optimum means of preventing infringements and their associated risks. Over the years, the structure of the Belgian airspace has become more complex. This evolution has been identified as one of the leading contributing factors of unauthorized entries into notified airspaces. In the first edition of the leaflet several risks resulting from an infringement have been underlined, as well as an initial statistical analysis of the airspace infringement issue: the areas that are most prone to reported infringements in Belgium are CTR and TMA, both military and civilian. The second edition of the airspace Infringement leaflet informs on the Belgian ‘hot-spot’ airspaces and explain the actions that will be undertaken in the near future, in an effort to reduce the number of infringements.

The BCAA communicates the aviation safety information leaflets on airspace infringements to all Belgian pilots and pilot’s training organizations. Both leaflets are published on the BCAA’s website.

c.    Making of a video clip on the prevention of airspace infringements in the Belgian airspace

The BCAA also contributes to the implementation of a pan-European Safety Promotion campaign on preventing airspace infringement and reducing the risk of “Mid-air Collision (MAC)” including awareness of the Belgian airspace complexity and the use of technology by making a video clip on the prevention of airspace infringements in the Belgian airspace in cooperation with the European Aviation Safety Agency Safety Promotion Network (EASA SPN) of National Aviation Authorities.

The BCAA’s website provides links to the Belgian video and to other entertaining yet informative video’s from EASA and other European countries. These video’s suggest useful tips that will help to reduce the risk of airspace infringement and mid-air collisions. It is recommended to start with those video’s corresponding to the countries where the pilot wants to fly or cross. The BCAA’s website also contains all other materials on avoiding infringements (leaflet, infographic, banner…) developed by EASA as a part of the Europe-wide safety promotion campaign.

EASA and the BCAA encourage to use these video’s and documents in the club briefing rooms to help others.