What is aircraft leasing and why do airlines lease? Aircraft leasing is in essence a simple transaction. Typically an aircraft lessor purchases aircraft directly from the airframe manufacturer e.g. Airbus or Boeing. These aircraft are then leased by an airline which gives them the right to use the aircraft for which rental or lease payments are made to the lessor. For airlines, lease options give financial flexibility freeing up liquidity and minimising issues arising from the management of residual value of aircraft as they age. Leasing also allows for greater flexibility as regards replacing older aircraft or growing a fleet at the time that is right for an airline without having to manage long lead times to delivery of new aircraft.
(Contribution from Ireland)

In the mid 1970’s aircraft leasing was in its infancy. The formation of Guinness Peat Aviation (GPA) in 1975 in Ireland, a joint venture between the then national carrier Aer Lingus and the Guinness Peat Group (a London-based financial services company) laid the foundations and cemented Ireland’s future position as the global leader. GPA became the world’s largest commercial aircraft lessor in the 1980s forging links with both airframe manufacturers and airlines globally. At its peak in the early 1990s, the company was valued at US$ 4 billion and had over 200 employees.

Ireland, with more than 40 years of experience, is the global leader in aircraft leasing.

Many of the staff and directors of the company, leveraging the expertise gained at GPA went on to hold senior positions at and indeed found, other aircraft lessors, setting the strong basis for the existing sector in Ireland.  It is estimated that Ireland is responsible currently for over 60% of the leased commercial fleet worldwide.

Statistic: In the year 1980 – 6% of the world’s commercial aircraft fleet is leased

There are a number of factors which have contributed to the strength of Ireland’s aircraft leasing sector not least the key steps taken by the Irish State. The National Aviation Policy for Ireland 2015 recognises the contribution of aircraft leasing in its own right and in supporting activities in related sectors such as Maintenance, Repair and Overhaul.

In 2005 the International Interests in Mobile Equipment (Cape Town Convention) Act, 2005  was enacted making Ireland one of the first countries to ratify the Cape Town Convention and its associated Aircraft Protocol. The implementation of the Convention in Irish law was supplemented in early 2017 with the adoption of the insolvency provision known as “Alternative A”. This special insolvency regime mitigates costs during insolvency events in respect of aircraft objects imposing definitive deadlines for return of aircraft to creditors and ensures the preservation of its value before return.  In overall terms Cape Town increases certainty for creditors e.g. banks, lessors, Export Credit agencies and reduces their risk which in turn increases the availability of funds for debtors e.g. airlines and reduces premiums to be paid. 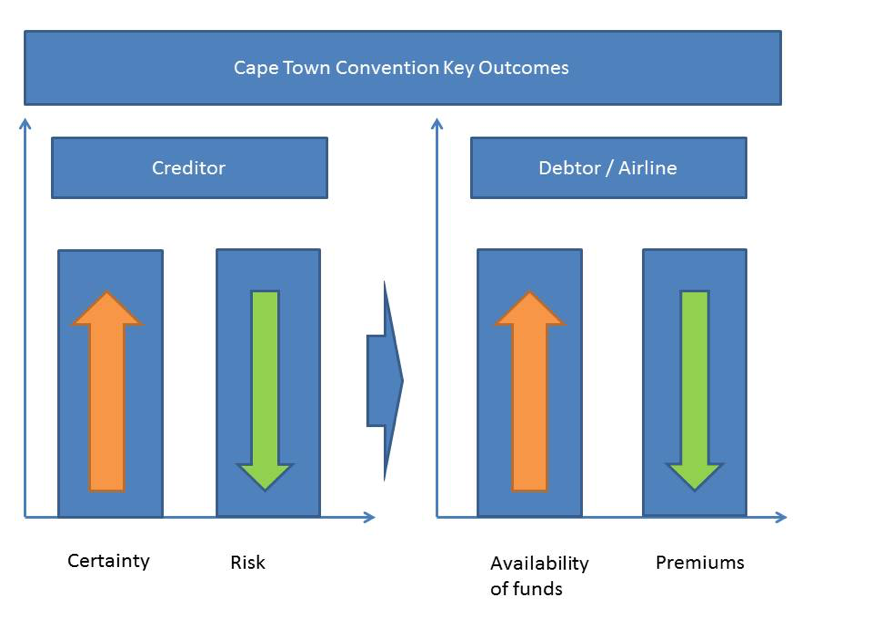 Ireland continues to advocate for the adoption of this important international legal instrument, leading on the development of an Information Paper on the Cape Town Convention presented at the ICAO 39th Assembly in 2016 . Ireland, as at 30 August 2018, is included on the OECD Cape Town List which qualifies Ireland for discount on export credit premiums.

The International Registry of financial interests in aircraft is operated by an Irish company, Aviareto.  Aviareto have successfully operated the registry since its inception in 2006 and has been approved by ICAO to run the registry until at least 2026. While Ireland’s ratification of Cape Town is important, there are a host of factors which help to differentiate Ireland and cement its reputation as the leading country in which to base aircraft leasing.

Statistic: The International Registry recorded its 1 millionth registration in January 2019, representing over half a trillion dollars of aircraft assets.

Rob Cowen, Managing Director of Aviareto on the success of the International Registry (IR):

Key to the success of the IR is Aviareto’s deep engagement with the aviation leasing and finance sector in Ireland. We maintain a strong relationship with all our IR clients, our location in Ireland allows for easier access to operational lessors and specialist legal expertise.

There is an underlying network of additional factors, mostly provided at State and agency-level which support and enhance Ireland’s offering. Ireland has an extensive double taxation treaty network worldwide which currently stands at 74 agreements of which 73 are in force. This creates a positive business environment for lessors. These agreements span across major states in each geographic region of the world and serve to mitigate and even eliminate withholding tax applying to lease rentals in the lessee country. This reduces cost for international airlines doing business with Irish based lessors. As the lessee ordinarily bears the cost of withholding tax any reduction on exposure to the tax makes commercial sense for the airline.

Ireland’s legal system is also a key strength. The Irish High Court has jurisdiction over the International Registrar. Cases brought before the High Court relating to the IR have been processed speedily giving judgements in line with the Cape Town Convention provisions.

Ireland’s regulatory regime supports the registration of aircraft based offshore on the Irish aircraft register, in accordance with Article 83 bis of the Chicago Convention. The Irish Annex 7 compliant aircraft registry currently has over 690 commercial air transport aircraft, making it one of the larger commercial aircraft registries globally.  This includes the use of Irish registered aircraft by other States air operators, whereby regulatory oversight is delegated to the aviation regulator of the operator in accordance with negotiated Article 83bis agreements. The use of an 83bis agreement facilitates the access for airlines to newer generation aircraft through financial leases that they may not be otherwise able to. Indeed Ireland not only has been a pioneer in aircraft leasing but also in the use of 83bis agreements and continues to support its development through participation in ongoing initiatives such as the ICAO Article 83bis Task Force leading to the publication of the ICAO Manual Doc 10059 entitled “Manual on the implementation of Article 83bis of the Convention on International Civil Aviation”. The effective and efficient operation of the Irish aircraft register continues to support the activities of lessors in Ireland.

The availability of skilled personnel is another key strength. There is a depth of expertise which has built up over the leasing sector’s 40 year history leading to the development of specialist supporting services in legal, taxation and financial services. The demand for the next generation of leasing specialist is being met by the higher education sector in Ireland. Irish third-level institutions are providing more specialised aviation-related educational programmes including those aimed specifically at aviation finance and leasing. Among those specifically aimed at aviation leasing and finance are the Specialist Diploma in Aviation Leasing and Finance at University of Limerick and the Masters programme MSc Aviation Finance at University College Dublin Smurfit Business School. Both of these programmes are industry supported and led.
It is estimated that aircraft leasing makes a total of $660m annual contribution to the Irish economy while supporting over 4900 full time equivalent jobs employed by operational lessors and also by a host of ancillary financial and legal specialist providers.

Statistics:
In the year 2017 – 40% of the world’s commercial aircraft fleet is leased
Estimated that over 60% of the leased fleet is managed by lessors based in Ireland 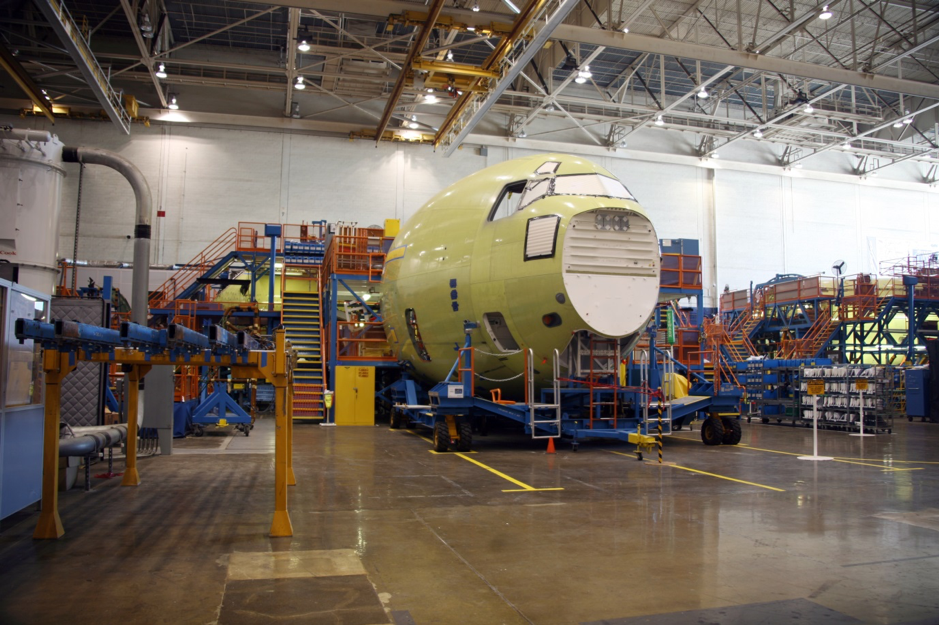 Impact of leasing in air transport

It is consistently predicted that demand for air transport services globally will almost double by the year 2035. While the bulk of the growth is predicted to occur in the Asia Pacific region all global regions including Europe are expected to experience continued growth. As the statistics show the proportion of the leased commercial fleet has steadily increased over the years. The significant benefits of leasing are becoming more apparent not only to airlines but are being experienced by air transport consumers.
The legal predictability of international conventions, such as the Cape Town Convention, has provided for more diverse sources of funding and lowers premiums on funds for aircraft purchases. The economic benefits accruing to lessors and airlines, in turn, passes on to air transport passengers. The most important outcome is improved safety, in that airline fleets are being replaced more rapidly with newer, more comfortable aircraft deploying the latest innovations in safety technology.
The ready availability of modern aircraft through leasing will also ensure that airplanes emit fewer harmful emissions and will operate more quietly thus reducing the impact of noise.

Statistic: In the year 2035 – predicted that 50% of the world’s commercial aircraft fleet will be leased

The opportunities for aircraft leasing are on the rise as the growing demand worldwide for air transport continues. As always safety in the provision of those services is the top priority, mindful also of the need to mitigate the environmental impacts of air transport.  The leasing option provides easier access to newer, greener, more technically advanced and most importantly safer, aircraft and engines. Ireland has the strength and depth to serve the global aviation sector in meeting that growing demand through its excellence in aircraft leasing and through its close knit ecosystem of supporting specialist services, aviation enterprise, and effective and efficient regulation. Mindful of future needs, Ireland is also setting the foundation for the next generation of specialist aviation leasing professionals to help serve the safety, efficiency and environmental goals of global aviation.