In this surreal situation we find ourselves today, maybe it is a good idea to write a few words about something completely different and less surreal: What is it like to be a member on the Air Navigation Commission?

It has now been almost two years that I was officially nominated to this “august body” of ICAO (that is how sometimes we refer to it, when we want to be extremely formal), so, to start, let us go back in time and into the history of the ANC.
Albano Coutinho

Today, the ANC has 19 Members and in addition State and Industry Observers, who take part in its work and are very important to guarantee the implementability of the work.

The ANC has 3 sessions per year, in the 1st, 2nd and 4th quarter, which usually coincide with the timeframe of the Council. Each session has 6 weeks of meetings with a recess period of a few weeks in the middle. However, the ANC or its sub-groups continue their work during recess and between sessions, either by engaging with the Secretariat or the ANC Panels, to prepare further work during the official meetings.

How to: build an ICAO SARP

If you follow the arrows, you will walk along the ANC path that leads to the establishment of an ICAO SARP (or its amendment). In terms of the timeline for this process, this is how it looks: 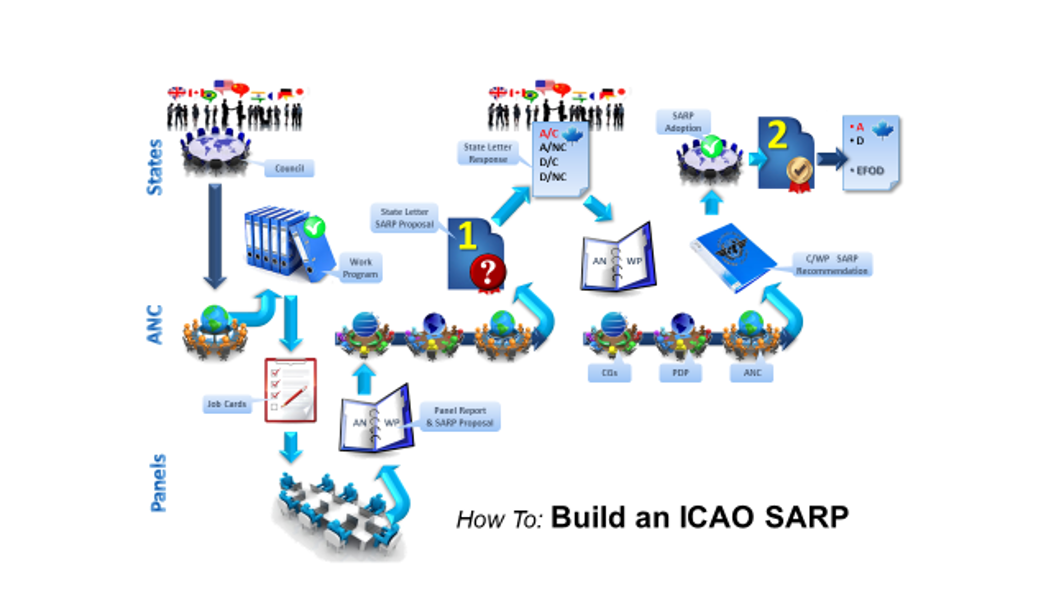 During a High Level Safety or Air Navigation Conference (or even an Assembly), States present proposals for new or amended SARPS. This can also result from a PIRG/RASG meeting and originate from an industry proposal, supported by States;

ANC assigns the work, through a job card, to the respective Panel;

This process can take 2 to 3 years to complete, which may seem too slow, but if you think that this is to allow the widest participation of experts and industry, and then allow for 193 Member States to have the chance to comment and agree (or disagree) first with the proposal and then with the final version, it is not that bad. The fact is that Aviation is where it is today, in terms of Safety and Air Navigation, thanks to this mechanism. However, there is always room for improvement, and we, the Members and Observers of the ANC, are working on ways to streamline our work programme in order to achieve better and faster results (e.g., working on a new prioritization process to focus the work of the scarce resources on the most important and urgent subjects).

So far, it has been a very enriching experience working together with a diverse group of very experienced aviation professionals, both in the ANC and in the ICAO Secretariat, and without forgetting the important contribution of the ANC Panels, with hundreds of experts from around the globe.

All of this is now being put to a test, as we navigate the stormy skies of COVID-19, which is going to be the main focus of the next few months (at least). Aviation, the main vehicle the virus used to spread to the whole planet, is, for sure, one of the most affected sectors by this pandemic, with overwhelming numbers emerging everyday as to its effects on airlines, airports, ANSPs and all the stakeholders, directly or indirectly involved in this industry. The next few months will certainly not be the time for “business as usual” for the ANC and for ICAO as a whole. It will be the time to focus on supporting the Member States and the industry, in order to bring aviation back to life, of course with “Safety is paramount” at the core as always, but with a lot of pragmatism and thinking “out of the box”. This is a new situation for all of us but we will come out of this stronger and much better prepared for the next time we are confronted with a pandemic of this dimension.